I'll Be Gone in the Dark: One Woman's Obsessive Search for the Golden State Killer, by Michelle McNamara

True crime books make up only a tiny fraction of my home library, and those are generally accounts of  crimes from long ago.   I had picked up I'll Be Gone in the Dark when it came out in paperback after I'd watched a tv documentary about the Golden State Killer; I knew then that I had to read about it.   Once I opened I'll Be Gone in the Dark, I could not stop reading.  To borrow Megan Abbott's reaction blurbed at the beginning, "This book just knocked me over."   I finished the book by dinnertime. 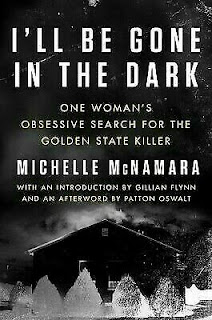 "Golden State Killer" was the name given by author Michelle McNamara to the real-life monster who was responsible for 50 sexual assaults in Northern California and ten or more murders in the southern part of the state.  While law enforcement officials in both areas investigating these cases were stumped and completely frustrated over a number of years, a breakthrough came in 2001 when DNA proved that the same individual had been responsible for all of these horrific crimes.  She had originally used that name in an article she'd written for Los Angeles Magazine in 2013; prior to that the guy had been known as "The East Area Rapist" in the north and the "Original Night Stalker" in the south, collectively EARONS once his DNA had been identified as having been linked.  He had started his reign of terror in the 1970s; by 1986 he seemed to have stopped.  In I'll Be Gone in the Dark she not only examines the crimes and the hunt for this man, but also provides a rather empathetic aspect  to the victims and their families, to the men and women in law enforcement on whom this case took a huge toll in some cases, and plays it straight about her own obsession with this case that she had wanted to see through until the end, hoping that the guy would be caught.

She begins with a sort of teaser about a summer hunting for the Golden State Killer from her daughter's playroom.  She says that "every obsession needs a room of its own," and there, after husband and child were asleep, she did her work on her laptop "surrounded by a half-dozen stuffed animals and a set of miniature pink bongos."  I use the word "teaser" because this is just a glimpse of what's to come as we read about all the reports, archives and transcripts she read, all of the countless hours of work she and her researcher put into trying to find the guy, her meetings with members of law enforcement, trips to scenes of crimes, interviews with victims or their families, reaching out to fellow DIY detectives online, and even the unanswered questions left behind after her death.

It's this obsession that captured me completely throughout this book, the thread I followed and hung on to while reading.  In part two, for example, via early drafts of Michelle's Los Angeles Magazine article, she speaks about a woman she calls "The Social Worker" who had lived in the east Sacramento areas "through the height of it" who warned Michelle to "take care of herself. Or it can consume you."  Michelle's answer: "Can?"  She also states that she didn't laugh about the warning, but "agreed to pretend" that they were "skirting a rabbit hole...rather than deep inside it."  When it's not her talking, but rather sections pieced together from notes, for instance,  I definitely noticed.

Gillian Flynn says in her introduction that "I'll Be Gone in the Dark" is a "snapshot of time, place, and person."  This is so eloquently captured throughout the book, but as she also notes, it's Michelle's writing about  the people here that helps to power the story.  Her husband says in his afterword that


"What interested her, what sparked her mind and torqued every neuron and receptor, were people ... "

which is so obvious as she writes about the victims, their families, or people caught strongly in an aura of fear and utter terror just living their daily lives


"on their way back from the disco club, or a double feature of 'Earthquake' and 'Airport 77' at the drive-in, or the Jack LaLanne gym"

who knew that anyone could be a victim, any home could be the next target,  or that even the presence of a man in the house wasn't a guarantee of safety.   She also realizes the costs paid by the men and women of law enforcement for whom the Golden State Killer


"still haunts their dreams.  He's ruined their marriages. He's burrowed so deeply inside their heads that they want to, or have to, believe that if they locked eyes with him, they'd know."

The man responsible has left a huge wake behind him; his years of terror,  it seems, have taken a personal toll on everyone, including the author.

I spent an entire day on nothing but this book; once I was in that was it.  Outside world gone. Given that I'm not really a huge fan of modern true-crime accounts, and that they're not a usual stop in my reading repertoire,  that says something. I will say that it was a bit choppy in construction which was a bit of a put off, and I'm not quite sure I was as attentive in the final chapter when it was mostly a lot of facts related by Michelle's lead researcher and a journalist friend of hers.

The book ends with an epilogue entitled "Letter To An Old Man," in which she predicts that


"One day soon, you'll hear a car pull up to your curb, an engine cut out. You'll hear footsteps coming up your front walk...The doorbell rings.  No side gates are left open. You're long past leaping over a fence. Take one of your hyper, gulping breaths. Clench your teeth. Inch timidly toward the insistent bell.

This is how it ends for you."


And in the end, that's how it was.   Unfortunately, for all of the time, energy, determination and sleepless nights she put into trying to help solve this case (the "obsessive search" of the title), McNamara died in 2016, thus never got to witness the moment she'd been waiting for.   I find that tragic in a very big way, since throughout this book I could absolutely sense how very much she wanted this guy to be caught, locked up, and put away for the rest of his life.