The Onion Field, by Joseph Wambaugh 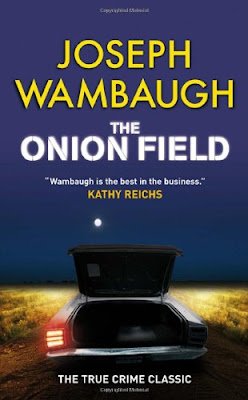 "The Onion Field is the frighteningly true story of a fatal collision of destinies that would lead two young cops and two young robbers to a deserted field on the outskirts of Los Angeles, towards a bizarre execution and its terrible aftermath."

After having finished reading The Onion Field  last week I can say that this short and succinct paragraph doesn't even begin to scratch the surface of what happens here.  While the book discusses the horrific killing of a policeman that took place on March 9, 1963, the real story here is that of the surviving officer, Karl Hettinger and the long ordeal he faced after the murder.
The traffic stop made by LAPD officers Ian Campbell and Karl Hettinger on the night of Saturday March 9, 1963 led to the death of Campbell as the two officers found themselves disarmed by a pair of thieves who were out to commit robbery.    The "official" reason for the stop was that the Ford's license plate lights were out, but the men in the car had already aroused their suspicions.  Campbell approached the car and opened the driver's door carrying only his flashlight;  he then asked the driver to get out of the car.   Greg Powell complied, but quickly disarmed Officer Campbell, while ordering his partner Jimmy Smith to take Hettinger's gun as well.  Campbell, who by now had a gun in his back, told Hettinger to give up his gun,  which he did.   The policemen were ordered into Powell's Ford coupe, with Powell ordering Campbell to drive and Hettinger forced onto the floor of the back.  Powell assured both men that they would be driven up the Ridge Route and let go on a side road so that they would have a "long walk back to the highway."  Indeed, about ninety miles from where they'd started, Powell ordered Campbell to turn off on a dirt road and to stop the car; both officers were told to get out.  Within minutes Campbell is dead and Hettinger is running for his life.  He makes it to safety, but as Wambaugh so clearly shows here, he will never escape the onion field.
After Campbell's death and the arrest of the killers, it doesn't take too long  until Hettinger's actions that night are being second guessed, with the first comments coming from a former roommate of Hettinger's and fellow cop who told his friends that

"You can always do something. I just don't see giving up your gun to some crook under any circumstances. And even after that you can do something. Karl should've..."

and then things get worse.  As a "young red-faced vice cop at Wilshire Station" who had been on the job for less than three years (whom I'm guessing is Wambaugh himself, as he started his police career in 1960) had learned during his time there,

"Policemen thoroughly believed that no man-caused calamity happens by chance, that there is always a step that should have been taken, would have been taken, if the sufferer had been alert, cautious, brave, aggressive -- in short, if he'd been like a prototype policeman."

In reading "prototype policeman," think tough guy.  An order in memo form was then circulated throughout the LAPD that basically labeled Hettinger and Campbell  as "cowards no matter how you slice it."  Written by an Inspector Powers ("a cop's cop") on "Officer Survival," it instructed officers that "Surrender is never a guarantee for anyone."  Prior to reading it at a roll call, the station captain added his two cents' worth, saying that

"Anybody that gives up his gun to some punk is nothing but a coward."

Although there had been other recent instances of policemen being disarmed, no harm had come to any of them and it is likely that neither Campbell nor Hettinger expected anything different in their experience.  And while some of the men didn't necessarily agree with its contents or its bottom-line message, the memo "was given the chief's blessing," and thus  became part of the LAPD's manual.  As Wambaugh states,

"Both the dead man and the survivor were implicitly tried by police edict and found wanting. There had to be blame placed."

Hettinger himself believed that "almost all policemen were critical of his behavior that night."  Now I get that what we know now as PTSD wasn't a term yet invented or even defined in 1963, but when he is forced to resign after being caught for shoplifting, one might have thought that someone would have connected the dots and viewed Hettinger's acts as a cry for help, but that didn't happen.  Hettinger himself wasn't fully aware of why he did this or why he was plagued with nightmares and other symptoms.

Things slid further downhill for Hettinger during the trial, since he had expected to tell his story once and then get back to his life, without having to live through it again. That wouldn't be the case --  Wambaugh, who read through thousands of transcript pages,  carefully goes through what happened in the courtroom to reveal how this trial was prolonged for nearly seven years after a retrial, a number of appeals, and a defense attorney who seemed to delight in causing trouble and shakeups.

If you're expecting your standard true crime book, look elsewhere.  Not only does the author do an excellent job of portraying Hettinger's ongoing suffering in the wake of Campbell's murder,  but he is in no hurry to get right to the killing, periodically cutting away from the night of March 9, 1963 to examine the lives of all four of the main people involved as he takes his readers right up to the point of intersection when everything went so wrong.  The Onion Field is well written with a depth so rarely seen in true crime reporting; it is intelligent, suspenseful, and above all compassionate, all making for an excellent read.  It's a book I put down only to sleep.

Oh - and don't miss the film! It doesn't quite capture the immense depth of the book, but it comes very  close.