Court Number One: The Trials and Scandals That Shocked Modern Britain, by Thomas Grant 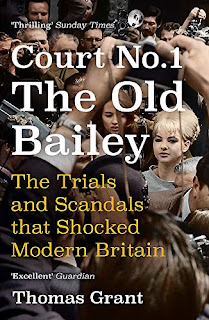 9781473651630
John Murray, 2020
440 pp
paperback
I don't remember quite how I stumbled upon this book but I had picked it up in August  and sadly let it sit on my shelves for the next four months.  I'd actually forgotten about it until as part of my end-of-year cleanout I rediscovered it, making it almost like a belated Christmas gift to myself.   It took me about five days to read but I was completely engrossed throughout, since out of the eleven cases covered here, I was familiar with only three, and even  among those I'd had little to no clue about the courtroom side of things.
I must admit to being a wee bit confused over the actual title of this book, which in 2019 was published as Court Number One: The Old Bailey Trials That Defined  Modern Britain 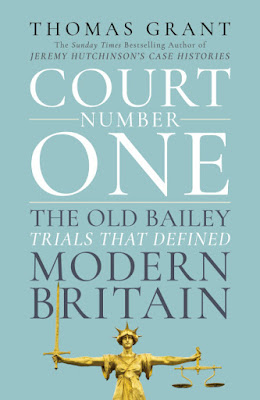 leaving off the words "scandals that shocked"  of this later edition.  I  would hate to think that the title change might have been an enticement based on those three words to garner a larger reading audience,  because this is much more than just a tell-all for titillation.  As the back blurb says, "Court Number One recorded the changing face of British society, providing a window on to the thrills, fears and foibles of the modern age."  As the author puts it,

"This is a book about this courtroom, about some of the people who have appeared in it, whether as defendant, counsel or judge, and about the practice of criminal law. It is also intended to be about British sensibilities and preoccupations over the last hundred years. It is one of the contentions of this book that through the criminal trials that have occurred in Britain's foremost court there can be traced at least one version of social and moral change over the last century."

The author takes his readers through eleven cases ranging datewise from 1907 to 2003, some familiar, others less so.   What remains constant throughout is the idea that, as Grant says, "the court is not a hermetically sealed space, divorced from the values and prejudices outside."  Setting each of these cases within its contemporary social, cultural and political contexts, it soon becomes clear that the "language of the courtroom is as much saturated in ideology as any other medium."   These words come directly from his coverage of the trial of Marguerite Fahmy, but they are appropriate in each and every case in this book -- as  times and cultural attitudes change, contemporary popular prejudices are also reflected in how the case plays out in court.
The story of Marguerite Fahmy, as a matter of fact, is one of the best exemplars of this idea, and quite frankly, it makes for appalling reading.   In 1922, Marguerite Alibert married "Egyptian playboy" Ali Fahmy Bey in France, sealing the deal after converting to Islam and having an Islamic wedding in February 1923. It was a terrible marriage  in which Fahmy had expectations of "obedience" from his wife and she, "a hard-nosed adventuress" thought otherwise.  Violent quarrels between the two were commonplace as they traveled "around the finer cities of Europe."   On July 10 of that year, the couple were staying at London's Savoy hotel where at 2:30 in the morning a hotel porter coming out of the elevator and carrying luggage saw Fahmy Bey in the corridor, who demanded to see the night manager.  The porter, continuing on his way, heard three shots, turned back in time to see Marguerite throwing a gun to the floor. By 3:30, he was dead.  Marguerite was arrested for her husband's death, and what would seem to be an  open-and-shut case made its way to a trial that lasted for six days.  When it came time for the verdict, she was found not guilty.  How could this happen, one might ask, when she was caught dead to rights? It seems that her defense attorney had hit upon a defense that would not only acquit Marguerite but also cause "the whole of Court Number One" to break out into "thunderous stamping and applause" by conjuring in the mind's eye  "the abominations and cruelty of the Orient and the plight of a Western woman caught it in its maw."   The author calls her defense a "carefully constructed piece of rhetoric" drawing on "prevalent literary and cultural motifs" in which the "image of the Eastern man, cruel and sexually masterful," was the stuff of  "fiction and cinema of the time" that both fascinated and horrified. One need only turn to the "poisonously salacious"  story of Diana Mayo in E.M. Hull's The Sheik to understand why.
As the author takes his readers through this century via the eleven cases tried in Court Number One, it is almost like having a front-row seat in the courtroom from which to watch every act of each drama unfold.  Murder, sex, "deviancy," espionage, prison escapes and more fill this book, as do serious miscarriages of justice.  I don't use the term "front-row seat" loosely here -- as the author also states, "the metaphor of the theatre is constantly employed in accounts of trials in the twentieth century," a theme that resonates throughout this book.
Court Number One is likely not for a reader who wants just a quick look at these cases, because it takes time for the author to establish the current cultural/social/political scene, to examine past cases that reflect directly or indirectly on the ones under study here, and most importantly, to try to offer a window on  the changes from one period to another over the century that also had a bearing on the action in the courtroom.  In that sense, it does seem to meander a bit, but with purpose.  It is a job well done,  an extremely interesting and informative book that made for fascinating (and at times, spellbinding) reading.
very, very highly recommended
Posted by NancyO at 2:55 PM