Ghostland: In Search of a Haunted Country, by Edward Parnell 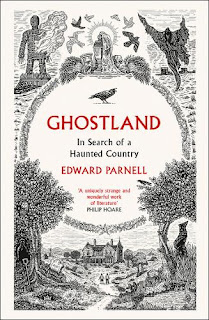 9780008271992
William Collins, 2020
468 pp
paperback
Given that I have an intense passion for old ghost stories and weird fiction, it's surprising that I hadn't heard of Ghostland  until I started seeing a number of reader reviews of it on Goodreads.   It was so highly regarded that I knew I had to read it, and once picked up it was not put down.  That's how very good it is.  It is all at once a book of psychogeography, a  chronicle of family, memories, travel, and nature;  and at its very heart, a beautiful, moving memoir of  grief.  And if that isn't enough to whet anyone's appetite, in Ghostland  Parnell also treads the ground walked by some of Britain's most famous writers of ghost stories and the weird.
In an interview at Folk Horror Revival, the author explains how he had gone to the childhood home of M.R.  James, Great Livemere, and wrote about it on his website, after which he was contacted by a managing editor from Harper Collins.  He was asked if he'd ever considered writing a book about James and "other writers of the weird and eerie."  The idea appealed, especially a book that would be "concerned with ghost stories and films and the places around Britain that fed into them."  In Ghostland , as he notes, since childhood he'd been "obsessed" with the supernatural and horror; as a four year-old, as his story goes, while on holiday in Wales at Caernarfon Castle, he'd asked the tour guide if there might be a chance they would see "the Spectral lady."  He was also, as he puts it "part of what The Fortean Times has come to term the 'haunted generation'." More to the point though, he says that he "only wanted to write about the subject if I could bring something of myself to the narrative," and after doing

"some proper thinking and research into who and where I'd want to explore, I realised that the locations I was considering were connected to my own family -- a story which itself could be said to be somewhat haunted."

Leaving Livemere, as he says in the book, "the final words of James' last published story, 'A Vignette' resonate:

Are there here and there sequestered places which some curious creatures still frequent, whom once upon a time anybody could see and speak to as they went about on their daily occasions, whereas now only at rare intervals in a series of years does one cross their paths and become aware of them?"

And in finding these "sequestered places," as he notes in the interview,

"the writing of the book became a way of reclaiming something that had been lost to me. A way of trying to give form to those half-glimpsed figures that otherwise languish in shadow on my father's old Kodachrome slides."

As he makes his way around to explore the locations from the books, movies, television shows and short stories that he enjoyed so much, he discusses these works and writes about the authors themselves, recalls childhood memories, and slowly reveals the story of his "phantom family -- a host of lives lived, then unlived" in an attempt to help him "reconcile the real and the half-remembered."

While I won't go into very much here, one of the key ideas that runs through Ghostland is the link between landscape and the work of the writers he's chosen to explore here -- and how awareness of their environment seemed to have been embedded within themselves as much as it has been embedded in their writing.    There are more than mere traces  to be found in, as the back-cover blurb notes, "the ancient stones, stark shores and folkloric woodlands of Britain's spectered isle," as well as the inland waterways (and I'm so happy he mentioned Elizabeth Jane Howard's "Three Miles Up" which is one of the most frightening stories I've ever read -- and beware, the film version is not quite the same), graveyards, and more, including the stone rings, hills, and other features found in Arthur Machen's work, or Ithell Colquhoun's Cornwall, to mention only a few of the many places he visits. But landscape, nature and place  also have personal connections for Mr. Parnell -- they evoke memories of family, which he can now remember not in terms of "disquiet" but rather as  "reassuring." His journey is related here much along the same lines as W.G. Sebald's  Suffolk journey chronicled in The Rings of Saturn (another recent, excellent read) down to the photos embedded within the text.

It is one of the most beautiful books I've read, a poignant way in which the author finds a way to try to express "what is haunting him," as well as a way in which to try to "lay to rest the ghosts" of his "own sequestered past."  I cannot recommend this one highly enough ... I'm sure I will go through it again many times.  An absolute no-miss for readers (like me) who thoroughly enjoy old ghost stories, and especially for readers who (also like me) are lovers of weird fiction.