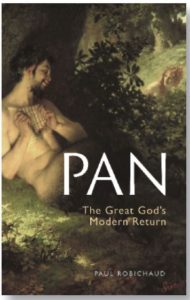 9781789144765
Reaktion Books, 2021
344 pp
hardcover
I am a huge fan of Arthur Machen's novella The Great God Pan (which I've recently reread),  and I've been saying for some time now that some enterprising person would be doing readers like me a huge favor by collecting and compiling every story ever written about Pan and publishing them all together in book form.  Since that's unlikely to be in the works for the near future, spending more time reading about the great god seemed to me to be a good idea, so I was beyond excited when I first heard about the publication of this book. It is one I've been looking forward to for a very long time, and without hesitation I can say that I was not at all disappointed. Historian Paul Robichaud has written this volume for readers "interested in learning more about the goat-footed god and how he has been imagined through the centuries."  That would be me. For sure.
"Through the centuries" is not an understatement in this case.  Robichaud traces the various ways that Pan has been envisioned from antiquity up to our own time, using "individual texts, works of art and musical compositions," introducing them and "relating them where possible to the larger tradition of which they form a part."     As he notes,

"Surveying Pan's role in mythology, art, literature, music, spirituality and popular culture ... shows how portrayals of the god reveal shifting anxiety about our own animality and our relationship to the natural world, whether this is understood as the wilderness beyond civilization or the cosmos as a whole. "

He begins with "Mythic Pan," exploring Pan's origins in the Arcadia region of Greece long before any written records appeared.  Earliest representations of Pan consisted of bronze statues revealing the great god as an object of veneration by shepherds in the area.  From there "the cult of Pan" made its way from Arcadia spreading across Greece, inspiring not only myth, but also poetry in the "pastoral" form as captured by Theocritus and Virgil (whose work, in turn, would also inspire others later through the centuries).

These "classical visions of Pan" ended when Constantine decreed that Christianity would become the Roman Empire's official religion, sending paganism into a "kind of half-life" until Pan and other pagan gods "disappeared from public view" up to the time of the Renaissance as discussed in "Medieval and Early Modern Pan."  He reappears in different forms during this time, usually allegorically, so as to avoid controversy with the church.  Signorelli's The School of Pan (1490) is just one example; as the author reveals,  art historian Michael Levey has described the figures in the painting as "banished creatures of mythology, who had always existed and who have now crept back into the welcoming Renaissance air."

A few of Pan's appearances in literature come by way of Rabelais, Francis Bacon, Spenser and Milton; in popular culture he becomes the figure of  Robin Good-fellow and even stands as symbol for James II, who was banished in 1688, serving as a code for Jacobites when it was dangerous to be known as loyal to the Stuarts.
I won't go through each and every chapter in any depth, but  after the Renaissance, Pan re-emerges during the late eighteenth century and the Romantic period, which

"valued wild nature, passion and imagination -- all of which were conducive to a rebirth of enthusiasm for the god, as was a revival of interest in all things Greek, including the irrational mysteries of Greek religion"

taking his readers into the late nineteenth century before moving onto the twentieth.   Noteworthy among the many and various works discussed in this section, the author offers queer representations of Pan in literature, including Forrest Reid's novel The Garden God from 1905 (which is now sitting on my shelf ready to be read thanks to a reprint by Valancourt Books) and E.F. Benson's short story "The Man Who Went Too Far," a chilling story which I recently read in John Miller's collection Weird Woods, published by the British Library.

Two more chapters bring us to the end.  First, "Pan as Occult Power" first examines Pan's more esoteric appearances in the work of Eliphas Levi; it's then on to fiction where he examines Machen's Great God Pan in some depth as well as the writings of Aleister Crowley, Victor Neuberg, Algernon Blackwood, and Dion Fortune before taking on Pan's association with modern witchcraft and the figure of the Horned God.    Chapter six then delves into "Contemporary Pan" which for me held a number of surprising connections to ponder.

Robichaud, as he explains at the beginning, has no assumptions that readers of this book might have "any prior knowledge of the material explored here," and he has written this volume in a highly-approachable fashion making it beyond reader friendly.   I have barely skimmed the surface in this post, but trust me -- if anyone wants to know anything at all about the Great God Pan, it's very likely found here in this wide-ranging exploration of the goat-footed god.   Beware though -- I came up with a list of twenty-five books I wanted to read from the author's source material.

Most definitely and very highly recommended; an excellent book that will have a place of honor on my shelves.