The Disappearance of Lydia Harvey: A True Story of Sex, Crime, and the Meaning of Justice, by Julia Laite 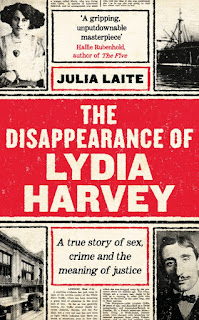 9781788164429
Profile Books, 2021
410 pp
hardcover
Before I launch into my thoughts here, I absolutely have to offer my grateful thanks to the unknown but very much appreciated person who sent me this book, whoever that person may be.
The Disappearance of Lydia Harvey is a well-constructed and thoroughly engaging work of history which might best be described as narrative nonfiction, meaning that there is not only a story to be told here, but a central plot, if you will, with a young woman by the name of Lydia Harvey at its center. We learn in the first sentence of this book that in January, 1910, "just a few months shy of her seventeenth birthday, Lydia Harvey disappeared."   That was her physical disappearance, but she also "disappeared again and again" in the stories told about her by others:

"She was no one. Who she was, what she wanted, what happened afterwards; none of this mattered.  She joined a legion of missing girls, whose brief appearances in newspapers and books remained uncomplicated by their past experiences of poverty, abuse or their exploitation in other kinds of work."

While many of these women had stories told about them which ended,

"condemned to a short life of misery, disease and degradation; they 'vanished forever beneath the slime of the underworld' and remained 'literally nameless and unknown,' "

Lydia, as we are told, "refused this story;"  and did not, as the dustjacket blurb reveals, "vanish forever into the slime of the underworld" despite others' expectations.
Lydia Harvey was sixteen years old in 1910 when she boarded a ship for Buenos Aires, leaving her family, her friends  and her job behind.  She had earlier been taken into a "respectable" home in the city as a domestic, but she worked long hours for very little money so when the opportunity arose to work in a photography studio, she took it.   It wasn't long until she met "a beautiful woman and a handsome man" who offered her "nice dresses" and would "help her to travel;" her job would be "seeing gentlemen."   Whether or not Lydia realized what she was in for is unknown, but as the author states, this girl, alone, sixteen, "work-weary and starry eyed" decided to take a risk, explaining her absence via letter to her mother saying that she'd gone on to become a "nursemaid for a respectable couple" in London.   In Buenos Aires she found herself working as a prostitute, constantly reminded of how indebted she was to  the couple who had brought her there, but things didn't go as planned, so  they all  traveled to London where eventually Lydia was arrested.  Her story might have ended there, but  in a Soho police station she "gave a witness statement that would form the key piece of testimony that saw her traffickers brought to some semblance of justice," and then, unlike so many young women in her situation, actually testified in court.
Author Julia Laite had first encountered Lydia and her statement while  researching her first book Common Prostitutes and Ordinary Citizens, published in 2011, and according to this interview in the New Zealand Herald ,  she couldn't get Lydia out of her head, "wondering what had happened before and what happened after."  In writing this book, not only does the author answer this question, but she focuses a lens on several people whose lives became interwoven with Lydia's, offering Lydia's story to emerge through their eyes as well.  She begins with Lydia's early life, moving her forward in time to being trafficked and to her encounter with the police in London; she then takes up the story from the perspective of the police, followed by that of the media, a rescue worker to whom Lydia was sent after being arrested,  and then finally on to the couple who trafficked her.  Yet this is neither a simple  biography or history by any means; there is a wider story at work here involving, among other things, rapidly-changing women's roles, a world becoming much more interconnected,  an increase in mobility among women, especially among the lower-middle and working classes, all of which sparked societal anxieties encapsulated by the "white-slavery panic"

"fashioned by crusading journalists and anti-vice campaigners and taken up by a society that longed for young women to remain in their traditional place, while exploiting them for their cheap and flexible labor."

Unfortunately, "the language of white slavery" didn't cover the exploitation of  "black, Asian and indigenous" victims;  the actual "white slavers" were also "profoundly racialised."   Often women such as Lydia were somewhat idealized, while at the same time there seemed to be far less attention paid to who was responsible.  There is also another, more complex matter that muddies the water: often, as in the case of one of Lydia's traffickers, Veronique Caravelli, sometimes women were both sex workers and traffickers, which seems to upset the typical understanding of victim and victimizer -- women who didn't quite fit the accepted mold of victims were most often characterized as criminals.   Lydia's story played out at a time of a growing  globalization of sex work,  the trafficking existing on an international scale that  ultimately required police forces around the world not only to be in communication with each other, but also to "establish a central authority in each country" to coordinate both national and international anti-trafficking efforts, which continued to victimize women. Obviously this is just a sort of nutshell description, and there is much, much more that I haven't even touched upon -- the role of the press, the role of social work, and so on, leaving it for the reader to discover.

At  the outset the author reveals that there are "thousands of missing pieces to this puzzle," either lost, destroyed, or never made part of any historical record.  Acknowledging that she had to weave "threads of imagination"  into the information she discovered, she also notes that she has "followed careful rules" in doing so -- historical evidence exists for every detail offered in this story.    Considering what she didn't have, she's done an excellent job here; not only is this book well researched, but the different perspectives that come to interconnect offer a more in-depth understanding of the individuals who made up part of Lydia's story  as well as (quoting the dustjacket blurb) "the forces that shaped the twentieth century."    I absolutely love reading history when it's written like it is here, in which an obscure figure from the past is given a voice and a life while all the while a clear picture of the world surrounding her takes shape.  It is also amazing how much of this story continues to resonate in our own time, which I picked up on very early in the reading, but it is an idea runs throughout the book.