Empire of Pain: The Secret History of the Sackler Family, by Patrick Radden Keefe 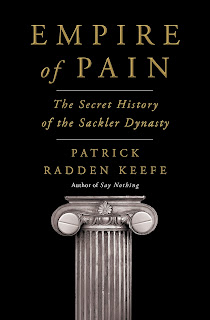 9780385545686
Doubleday, 2021
535 pp
hardcover
In the afterword of this book, the author notes that he'd started working on this project in 2016, having come to it "indirectly."  While researching the Mexican drug cartels ("not just as criminal organizations but as businesses"),  his research had led him to the "new emphasis, among the cartels, on heroin."  From there, Keefe was led to OxyContin, and to reading Barry Meier's Pain Killer and Dreamland (an excellent book, by the way) by Sam Quinones as well as articles published in the Los Angeles Times.  He notes that he

"was astonished to discover that the family that presided over the company that made OxyContin was a prominent philanthropic dynasty with what appeared to be an unimpeachable reputation."

In an interview at Esquire in October of last year, the author explains what was behind the writing of this book, saying that he didn't want to write a book "in which the Sacklers felt like cyphers, in which they felt very remote."   Since they would neither speak to or communicate with him,  writing a book would feel "ineffective -- as though you were seeing them through a telescope, very, very distantly." But then litigation against the company and later the family resulted in  a "huge body of documentation ... getting released in these lawsuits, including lots and lots of private emails" that offered Keefe a way to tell a "vivid and engaging" story, one in which "you feel like you really come to understand these people."   An engaging revelation of the lengths this uber-wealthy family would go to to avoid any accountability, Empire of Pain  is also a story of a family that somehow failed to pass on any sort of empathy through the generations, valuing their "good name" and their ongoing wealth above all other considerations.
And what a story it is indeed.  In 1904 Isaac Sackler arrived in America from Galicia, and along with his three brothers, opened up a small grocery store in Williamsburg, New York.  He did well enough to invest in real estate, but during the Depression when his fortunes started to wane,  he reminded his three sons that he had "bestowed upon them something more valuable than money... a good name."  As the sons' wealth began to grow, they delighted in seeing that "good name" adorn many a philanthropic enterprise, all the while keeping silent about where their money originated. In Empire of Pain, the author examines the Sackler dynasty, revealing a

"story about ambition, philanthropy, crime and impunity, the corruption of institutions, power, and greed."

Isaac Sackler always hoped that his sons would "leave their mark on the world,"  which  they did, but my guess would be probably not in the way Isaac had intended.

The three Sackler sons (Arthur, Raymond and Mortimer) went on to become doctors, the latter two joining Arthur  working in a state psychiatric facility in New Jersey, Creedmoor Hospital.  In 1942, while still working at Creedmoor, Arthur accepted a position with the William Douglas McAdams agency which specialized in pharmaceutical advertising, where the focus became one of "how do you sell a pill?"  Sackler was savvy enough to know that the real money would come from advertising directly to physicians rather than consumers, and beginning with a Pfizer product called Terramycin, he laid the foundations for future pharmaceutical marketing.  Without going into detail, Sackler's strategies included marketing to "the prescribers" in medical journals,  hiring a force of energetic sales reps, convincing prominent doctors to get on board with endorsements, having drug companies cite certain scientific studies (often underwritten by the companies themselves) that claimed that the new drug worked well and that it was safe.   What Sackler had created was a "synergy between medicine and commerce,"  and the strategies worked:  while the product itself wasn't particularly "groundbreaking," it was highly successful since "it had been marketed in a way that no drug had ever been."  Not only had "Arthur invented the wheel," but he'd also laid the foundation for the future of pharmaceutical sales, including Valium, which more than cemented the Sackler family fortune.  He also bought a "small pharmaceutical company" in 1952, by the name of Purdue Frederick, the running of which would be left in the hands of his brothers.

Flash forward in time: Richard Sackler, son of Raymond, got his medical degree  and in 1971 joined Purdue Frederick as assistant to the president (his dad).   When MSContin came along, Purdue started manufacturing and selling it in 1984, generating hundreds of millions in sales, "dwarfing anything that the company had sold in the past."  By 1990 though, Purdue was set to "lose the monopoly on its flagship painkiller" due to patent issues, so they needed a "successor." Enter OxyContin, in 1996.   The word at Purdue Pharma (formed in 1991)  was that this drug was so good that it would "sell itself" but Purdue was taking no chances.  The Sacklers followed Arthur's template in influencing government agencies like the FDA, co-opting physicians, completely downplaying the addictive qualities of the drug, faking reports, offering "capless" incentives to the sales reps, financing organizations advocating freedom from pain as well as pain research, and the list goes on.   OxyContin became "the one to start with and the one to stay with."  That turned out to be true: Purdue created a huge market for OxyContin, which in turn led doctors to prescribe it and to people becoming dependent on it.    It also launched a major public health crisis -- by 2010, "millions of people had become addicted to OxyContin and other opioids," and America was "in the grip of a full-blown opioid epidemic."   Purdue's answer:  it's not the drug, it's the people abusing the drug.
In the long run, as Keefe so skillfully reveals, the Sacklers did anything and everything necessary not only to deny and refute the claims of addiction, but also to preserve their "good name."
There is much more to this book than I can describe here, but as the dustjacket blurb notes,  Empire of Pain is "a portrait of excesses,"  as well as a

"study of impunity among the super elite and a relentless investigation of the naked greed and indifference to human suffering that built one of the world's great fortunes."

I don't know how anyone can read Empire of Pain and walk away unaffected.  What struck me the most was the family's sheer lack of empathy, the lack of any sort of accountability, and the ease with which they managed to co-opt the institutions that are supposed to protect the public, including the FDA and the Department of Justice.   The icing on the cake comes in watching the HBO documentary "Crime of the Century," which not only shows certain members of our government allowing all of this to happen, but also reveals how much Sackler money they'd received in campaign contributions.  But read this book first.
Highly, highly, highly recommended.
Posted by NancyO at 10:33 AM