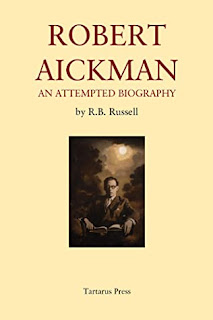 9781912586363
Tartarus Press, 2022
396 pp
hardcover, signed, #326
My introduction to Robert Aickman's stories came some years back via the Fontana Book of Great Ghost Stories with "The Trains" in volume one.  I remember sitting there mentally scratching my head, wondering what was going on there and puzzling over it until I gave up, deciding that I'd definitely have to come back to it another time.  My inability to decipher "The Trains"  might have made for a  frustrating experience and turned me off Aickman for good, but no, the opposite happened --  not only did I make my way back to "The Trains," but little by little I also started picking up his story collections and little by little I became a huge fangirl of his work.  I'm still mystified by many of his tales, but as Russell quotes author Sacheverell Sitwall in Chapter 22 (whose words from his For Want of the Golden City Aickman originally chose as the epigraph in Cold Hand in Mine), I've come to realize that "In the end, it is the mystery that lasts and not the explanation."
Aickman wrote two volumes of  autobiography entitled The Attempted Rescue (1966)  and The River Runs Uphill, published posthumously in 1986.     While "both are full of colourful personal details," we are told,  Aickman's  "version of events is not always to be relied upon." As the dustjacket notes,  in  An Attempted Biography, Russell "disentangles the myths that have surrounded Aickman and his life."  He also focuses on Aickman's long-lasting legacy of  two great achievements: his work for the Inland Waterways Association and his writing.   He also reveals much about the man himself -- Aickman was more than a bit over the top politically, often a downright cad when it came to how he treated women (most notably his wife Ray Gregorson who somehow managed to stay with him for sixteen years),  great company and charming with some people while unpleasant, rude and opinionated with others.  Somewhere in this book or elsewhere I've seen the word "polarizing" to describe Aickman, and that would be about right.  Through countless interviews, correspondence, his subject's own writing and many other sources,  Russell has written what just might possibly turn out to be the definitive biography of Robert Aickman.
Without going into any kind of detail here,  Russell begins with a  quick run through Aickman's childhood including his life with his mother and eccentric father;  Russell also touches on the "complex phantasies" which Aickman noted in The Attempted Rescue were what allowed him to survive his "first sixteen or seventeen years" of his life, "adolescent daydreams" which "were of the greatest importance to him."  By the 1930s, however, what Aickman really wanted was to be a writer --  Aickman's grandfather was Richard Marsh, author of The Beetle (1897) and the namesake of the literary agency Aickman would create with his wife Ray in 1941 after his claims of being a conscientious objector kept him out of the war.
After the publication of  L.T.C. Rolt's book Narrow Boat  in 1944, Aickman sent the author a letter telling him how much he and Ray admired his work, also making the suggestion that perhaps "some body" could be formed

"a disinterested group of enthusiasts (but not fanatics) could do much to better the state of the canals,"

and  offering to meet Rolt to talk about his idea.  As Russell explains,  the canals

"had been neglected for many years, a large proportion of them owned by railway companies that initially brought with them the aim of removing objection to their  proposed new railway lines,"

and that the four thousand miles of "navigable canal" had been reduced to half by this time.   Rolt agreed, and from this meeting (which Aickman  attended with his wife Ray but neglects to mention her presence in his autobiography, an ongoing thing with him evidently)  would be born the Inland Waterways Association (IWA), which became something Aickman "could really get his teeth into."  As it happens, Russell devotes a great deal of his book to Aickman's role in the IWA, and it's worth saying that Russell never lets the topic become dull -- while his subject was seen by some as a "pugnacious, persistent and fighting leader of the highest calibre," Aickman's time with the organization and his relationship with other members was often anything but smooth sailing (if you'll pardon the pun).
Of course, Aickman's writing career is an integral component of this biography,  especially his "strange" stories, which really started to be noticed after he and Elizabeth Jane Howard (with whom he worked on the IWA and with whom he had a lengthy affair) had their collection of stories published in We Are For the Dark  in 1951.  At this point, Russell notes, Aickman's "career in fiction was set... 'for the dark'. "  He also had stories published in periodicals, including The Tatler, which not only ran his "The Trains" but also some of Aickman's ghost stories in Christmas issues over the next two years.  It wouldn't be until 1964 when Gollancz published his The Late Breakfasters and Collins published his first Aickman-only story collection, Dark Entries, that his  "long-time ambition" of being a writer was realized "to his satisfaction."  He was also busy editing the first of eight volumes of Fontana's Great Ghost Stories.  Russell goes on to discuss Aickman's various works,  with the added bonus of  insight into his stories, then moves on to the "new generation of fans" he'd gained via his writing.  Ramsey Campbell, for example, read his Dark Entries in 1965, writing to August Derleth that Aickman was "the only new light on the fantasy horizon I could think of," then finally met the author in 1968.   The final section of An Attempted Biography goes on to discuss Aickman's "Posthumous Reputation,"  about which Russell notes that it now "appears to be secure."  I have to say that the fact that Aickman refused to "write with an idea of popular appeal" is one major quality that continues to draw me to his work.
As has been the case with each of R.B. Russell's books I've read, the writing is excellent, but of course, the true star of this book is Robert Aickman himself, a man who was "determined to realise his ambitions" and in so doing "often made enemies," as well as a man with "a great capacity for love and friendship."  It's obvious that Russell has not only done an incredible volume of research, but in doing so, has come to know his subject very well.
An Attempted Biography now enjoys a place of honor on my favorites bookshelf -- I am just completely in awe of what Russell has accomplished here.  Nicely done.
Posted by NancyO at 1:52 PM